A few months ago when the Philadelphia Eagles signed convicted dog killer/fighter and quarterback Michael Vick, it opened a firestorm of controversy. After Roman Polanksi was arrested in Switzerland, I wondered where was the same outrage. Among the arguments we heard about Michael Vick were as follows:

One wonders why Polanski has scores of defenders and Vick none. It’s something that always bothered me about the Vick outrage was that it was disproportionate with the crime in relation to reaction to other crimes. The reaction to Vick was part in response to his stature and visibility as an NFL quarterback, but I believe also a response to the person. Poor, not highly educated, black – none of these things work in his favor.

“In the United States, we want to capture Osama Bin Laden and murder him. We’re not gonna rape him. That would be barbaric!” Chris Rock

If anything deserves your outrage, it’s the Polanski crime and the support he has received since being arrested. Thank goodness for the common sense responses by Chris Rock, Jay Leno, and Kirstie Alley.

What do you think?

There are people out there that simply do not have any right to live. As bad as Michael Vick’s behavior was, this is worse. In South Jersey someone tied a pit bull to his bumper (yes he, only a man would do this) sorry, I digress, he tied his pit bull to his pickup truck and dragged the dog through a South Jersey neighborhood. The dog was found on a neighbor’s porch the next morning – horribly mutilated, but alive, and treating it’s handlers better than its previous experiences with humans would demand.

More than any thing that happens in the world – it’s things like this that sadden me the most. This isn’t just violence – this is sociopathic. Of course it was also last week that Miami police arrested a man for the mutilation attacks on up to 30 cats.

It just seems that we should be putting this type of behavior behind us. In all the sci-fi movies we evolve past this kind of violence. Where’s the future where we’d be have no wars, murder would be a thing of the past, and money wouldn’t exist – ok, that one may be coming true.

Where is the future we were promised?

April 20 is an odd and sad day in history. 10 years ago Eric Harris and Dylan Klebold walked into Columbine High School and killed 13 people and wounded 23 more. By doing so they sent an entire community into mourning and forced a country to rethink its policies. In the years that have passed very little has changed to address the situation in the United States. As a matter of fact, George Bush made sure that things actually got worse by allowing the assault weapon ban to expire in 2004.

It seems to me that we owe more to the memory of Columbine than talk. The NRA would rather see dead children than erode their precious second amendment right. Clinging to their guns. No other right in this country is better protected nor more deadly than this right. 9/11 made sure that free speech rights were damaged through the “Patriot” act. Looking at Prop 8 outcome in California, civil rights don’t seem to be that important to people.

But don’t take their guns. Got to have our guns. 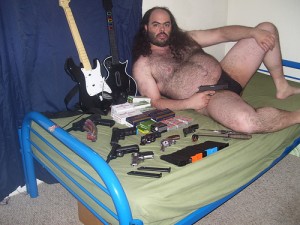 Apparently 4/20 is also a day to honor pot smoking and for activists to protest the illegality of marijuana.  Nothing shows the misplacement of priorities than our country’s unwillingness to implement common sense gun control in this country while fighting a drug that is less a societal issue than alcohol. Don’t get me wrong, I’ve never smoked pot and probably never will, but I really could care less if you do.  It just seems that guns have a much broader impact, and the vocal few that are worried about losing their guns are keeping the rest of the country hostage.

Maybe if Harris and Klebold had smoked a little pot, they would have been less inclined to kill their classmates. From what I know of pot smokers, planning isn’t a strong suit of theirs.

Hopefully one day we’ll become as enlightened as we think we are and we can prevent further massacres from happening, but as we found out at Virginia Tech just 2 years ago (almost to the day), the best protection that the  government  can offer and the policy that the NRA supports is duck and run.

Apparently another attack took place in the SEPTA terminal near where a man was beaten to death last week. This woman was lucky, and survived her attack. The SEPTA police was able to catch 5 of the 10 thugs by stopping the subway train at the next stop and capturing them there where the woman identified her attackers.

This is ridiculous. On top of this the DA has charged the five with robbery and assault charges; here’s my idea – in light of what happened last week, these idiots should be charged with attempted murder. If you want to send a message this is the best way.

Another thing – for years, crime has plagued other parts of Philadelphia, leaving the Center City relatively safe. Murders in the city, while not non-existent, still are rare. But it couldn’t stay confined for too long. Allowing
crime to run rampant (yes I said allowing) only allowed crime to overflow. Maybe now the city will care just a little bit more. When it was in the poor and working class neighborhoods, it was important, but now that it’s in the tourist and business areas, I guarantee the city will squash this.

Yesterday in Philadelphia there was a senseless crime – 36 year old manager of a Starbucks was killed by a gang of students from Simon Gratz High School at 2:30 in the afternoon.   He was simply leaving work for the day and never made it home.   This kind of violence is so upsetting; children in the middle of the day taking a man’s life.   The school district, the teachers, the parents, and of course the students seem to be a lost cause – essentially allowing the human version of pack dogs out on the street to murder.

All of that said – I was reading the account of this on Philly.com and the comments of readers and the vileness of the responses are disgusting.   Racist rants threatening violence from the illiterates of our society.   It’s disgusting – and this is on a newspaper   website- not a blog.   I’m all for web 2.0 – but I wonder if all this free speech is worth it when in crosses with the delivery of news.   I know people like to talk and argue, but the discourse found at these websites is generally not intelligent.

I don’t know why I expect more.

Or as Grace called it: Shopping in Philly