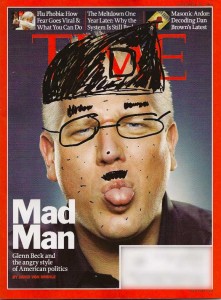 Today I couldn’t avoid the right-wing assholes. The Phillies happen to be on the same radio station as Limbaugh, so when I got in  my car this morning who else but Limbaugh blaring his fascist drivel; quick switch to the iPod. Then when I returned home, I checked the mail and who’s on the front of Time but Glenn Beck.

Quick use of a Sharpie saved the day. Much improved, don’t you think?

For years I have disagreed with the idea of a third political party – that there were two main parties and to get things done (like elect a President) you needed to support one of the main parties. When Arlen Specter switched parties earlier this summer, it was due to the type of political expediency; he was not a Democrat, but closer to them than the current Republican party. I think that many people would have thought that that if there were a third party, would have come from the fringe edges of the liberal side of the country. What has become apparent to me is that the true need is in the Republican party as the party moves more dangerously and sociopathically to the extreme ends of conservatism. These are the conservatives that include crazies like the birthers, secessionists, teabaggers, the town hall meeting attendees, etcetera, etcetera. This is not representative of the entire membership of the Republican party and those more moderate Republicans are being pushed out and silenced. The party is represented by the likes of Rush Limbaugh and Glenn Beck. I have to believe there are more viewpoints than that. But as they hold their party hostage, even rational and fair-minded Republicans are required to heed this fringe element, even if it puts them further out of step with the general public (the public who reserves secession for Texas – that is asking Texas to secede.)

At a point when this country is divided to the point where there is no valuable debate, we are left with one side in power, the other side babbling like village idiots, and the everyone else in the middle ducking and taking cover. Does it have to be this way?