I am lost. I know the fans (who were excited that Kevin Kolb was named the starter in February) wanted Michael Vick in September, but Eagles fans are generally morons; I expected more out of Andy Reid.

I probably wouldn’t have traded Donovan McNabb in the first place, but I could understand and accept the reasoning. Kevin Kolb was the future of this team and McNabb was the past. I know that Michael Vick gives them a chance to win now, but I thought the plan was to win the big one? Donovan McNabb was let go because he couldn’t win the big game. The same argument can be made against Michael Vick. Does everyone forget how Michael Vick looked in the playoffs? Say what you want about McNabb, he’s never looked that bad in the playoffs. His issue was always ending up a drive short – not an entire game. Is Michael Vick what we got rid of Donovan McNabb for? Does he really give you a better chance to win in January? No.

The only reason for this decision is that Andy Reid has to win now. Joe Banner is holding him responsible for 10 years of failure, as he should, and Kevin Kolb is paying the price. Reid doesn’t care about the Super Bowl, he cares about his job.

I used to love the Eagles, now I can barely stand them.

Andy Reid needs to go now — anything else is a waste of time. 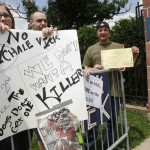 The old saying goes that you don’t discuss politics or religion in polite company – you can add Michael Vick to that list.

As soon as the Philadelphia Eagles signed Michael Vick, Philadelphia lit up. Tweets, Facebook statues, blog postings, radio talk shows, etc. People who didn’t even care about football were moved to take sides. There are bars that have pledged to turn off the Eagles games on Sundays – that’s like a bar saying it will stop selling alcohol on Fridays. That’s how passionate people feel about this issue, and can you blame them? Here’s a man that beat, tortured, maimed, and killed dogs in the name of sport; he is the Hitler of dogs. How do you redeem yourself for that behavior? If Hitler hadn’t committed suicide, could he have redeemed himself to Jews? No.

This past Thursday I responded to a  a friend’s Facebook  status update, more than 50 comments later, after that friend told me to buzz off (ok, he didn’t say that, but that’s what he wanted). Philadelphia has found its abortion issue. This issue has so divided the city, that it pits friends and family against each other. Sides are entrenched and both sides are getting testy. There are protesters on each side outside the Novacare Center in South Philly. Philly.com ran a poll this week simply asking if fans were for or against the Vick signing – the results were 51% against to 49% for the signing; the city wasn’t that divided over the Presidential election this past year.

This of course is not the most important issue in the world. It’s amazing that at a time when we’re trying to figure out how to fix our flawed healthcare system, that this issue has taken the headlines in this city.

It’s only football, and this doesn’t reflect on a whole city, just on the people that run the Philadelphia Eagles. Even though people will continue to discuss Vick, the games will go on and I am going to go out on a limb and say Michael Vick won’t be dog fighting ever again, so at the end of the proverbial day, all Vick’s signing will do is strain relationships for a few days before we move on to something else.

Michael Vick signed with the Eagles. Why? Let me start here – if I were an NFL owner, I would not have hired Michael Vick to my team. That would be my right. I think what he did was reprehensible, and I wouldn’t want to associate him with my team and my brand. It seems that year after year the Eagles give me more reasons to like them less and less. They don’t seem to like their fans and and they treat their employees like shit (see Brian Dawkins).

Thank goodness the Phillies have come back to their rightful spot as #1 in my sports heart.

There’s a lot of talk about how he shouldn’t be allowed back in the NFL, that he was given his chance and he blew it. Well that isn’t how this country works. I can see preventing him from taking jobs that are related to his offense – so he can’t work at a kennel or at a pet store, but the NFL is a sports league, and I think a lot of people forget that. Each NFL team is their own company and makes the decision on their own. It seems somehow un-American for people to be saying that the NFL should have prevented the teams from making this hiring decision. I don’t know if that is a country I want to be part of.

People want him to pay and pay and pay again. That again is not how this country works. If you want that type of legal system, move to Iran – I think we all see how people are treated there.

I do wish someone else had signed him – I don’t want my team associated with a thug like him. We now have the most hated man in all of sports. It kind of sickens me, but that said – he’s done his time, I see no need to punish him further.

There are people out there that simply do not have any right to live. As bad as Michael Vick’s behavior was, this is worse. In South Jersey someone tied a pit bull to his bumper (yes he, only a man would do this) sorry, I digress, he tied his pit bull to his pickup truck and dragged the dog through a South Jersey neighborhood. The dog was found on a neighbor’s porch the next morning – horribly mutilated, but alive, and treating it’s handlers better than its previous experiences with humans would demand.

More than any thing that happens in the world – it’s things like this that sadden me the most. This isn’t just violence – this is sociopathic. Of course it was also last week that Miami police arrested a man for the mutilation attacks on up to 30 cats.

It just seems that we should be putting this type of behavior behind us. In all the sci-fi movies we evolve past this kind of violence. Where’s the future where we’d be have no wars, murder would be a thing of the past, and money wouldn’t exist – ok, that one may be coming true.

Where is the future we were promised?

No not to resign – that should have happened about 4 months ago.   No the good choice was to choose today when everyone is talking about Michael Vick.

(That’s how overblown the Vick story has become.)

I am not role model. I’m not paid to be a role model. I am paid to wreak havoc on the basketball court. Parents should be role models. Just because I can dunk a basketball, doesn’t mean I should raise your kids. – Charles Barkley

It’s been 14 years since the iconic Charles Barkley Nike commercial became a point of discussion nationwide. This summer I’ve been reminded of that commercial repeatedly; It’s a summer that has included Barry Bonds drug aided chase of Hank Aaron’s home run record, the sad and tragic tale of Eddie Griffin, the Chris Benoit murder-suicide, the NBA gambling scandal, and of course the Michael Vick dog fighting case. Never has sports seem so far away from role model status as now, but it’s the Michael Vick case is the one that has captured media and public attention.

What Michael Vick admitted to doing is sadistic and displays a huge fault with his personality that now is visible for all to see. I wish I were surprised at Vick, but the days of my being surprised at what sports stars do ended long ago. I realized long ago that professional sports is a high profile marketing medium similar to movies and television, designed for fan entertainment; and while the great share of people that play are good, hard working, honorable people but that the excesses thrown their way lead to distorted bad apples. This isn’t just sport, it’s all of entertainment. Remember that this summer has also had Paris Hilton, Lindsay Lohan, and Nicole Ritchie all spend time in jail. With all that money and fame you can do extreme good, like Bono for instance or extreme bad – Michael Vick.

I also wish that I believed that the NFLs response were solely or even more importantly about their disgust for the acts, but we know that isn’t true. Michael Vick made them look bad, could cost them money and therefore they had to respond. I wonder though about the priorities. There are guys playing in the NFL that have spent time in prison for drug trafficking, been accused of attempted murder, been violent against women. Hoping to corner the market on wife beaters, the Philadelphia Phillies traded for a player that allegedly beat his wife. Not to belittle Vick’s actions (his actions are a clear indicator that he has serious violent tendencies that only start with dogs), but clearly they are not the worst things that have happened by the hand of a sports star. Think of Lawrence Phillips while he was playing football at Nebraska (btw, if your Wikipedia photo is a mugshot, that pretty much says it all):

Late at night when the team returned from East Lansing, Michigan, Phillips went looking for his ex-girlfriend, Kate McEwan, a basketball player for the Nebraska women’s team. He found her in the apartment of another football player, Scott Frost. Frost had transferred from Stanford the year before, and was sitting out the 1995 season. Phillips found McEwan and assaulted her by dragging her down a stairwell by her hair. Frost was eventually able to intervene, but not before Phillips had caused significant harm to McEwan – Wikipedia excerpt

What was Phillips’ punishment? He went on to star in the 1996 Fiesta Bowl and be drafted #6 by the NFL and paid millions. He never became a star because what happened in college turned out to be an indicator of who he was – go figure. When the Pittsburgh writer said that “Vick would been better off raping a woman” – it was harsh, and could have been better thought out and better said, but he may not have been factually incorrect.

We need to take special care on what people we decide to canonize. It seems these days all you need is a 8 digit bank account, be good on the field, or seen on the red carpet. These people have done nothing to deserve our praise. I’m not saying not to watch. I get great enjoyment out of watching sports – but would I want to have a player over for dinner? Not without knowing the person first. Being a professional sports star is not enough to garner my praise and it never will be.