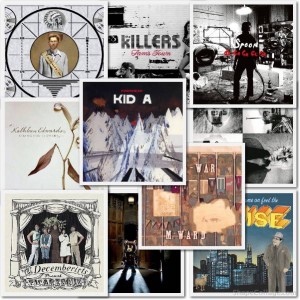 Last night we saw M. Ward at the Trocadero here in Philadelphia. There are very few shows that I’ve attended where I’ve looked back and said “I was there when”. They seem to all take place at the Troc. Radiohead and Belly in 1993 and Elliott Smith in 1998 are the two that immediately come to mind. Last night reminded of the first time I saw Elliott Smith (iTunes) play. At the time Elliot was coming off of the release of XO which followed up on his commercial breakthrough which was his soundtrack for the movie Goodwill Hunting. That night I almost didn’t go. I was supposed to go with a girl that I was interested in and she bailed on me. I  vacillated  between going by myself and staying at home – I decided to stay at home but  turned on the television only to see Bill Clinton giving a speech.  I turned off the TV and made a mad dash to Center City. It wasn’t quite filled, but it wasn’t empty and all of the fans there walked away amazed. I even met a girl there making the decision to go alone all the more fortuitous. Quite  a special night.

Last night was very similar in feel. I was there with my girl – this time my wife Kristen. After last year’s She & Him (iTunes) project with Zoey Deschanel, M. Ward has released the gorgeous album Hold Time (iTunes). Like Smith, Ward has done a lifetime of attention deserving work before people were paying attention. They’re really paying attention now. I’ve seen some major acts at the Troc – Radiohead, Pavement, The Lemonheads at their height – all shows were well attended, last night’s sold out show was the most crowded I remember attending (a scary proposition for those of you familiar with the Troc. Thank god that Ward isn’t really a pyrotechnics type of act.) It started with just him and his guitar for three songs. The crowed was transfixed, mouths agape, as if trying the breathe in the music. M. Ward’s voice is like Tom Wait’s prior to Wait swallowing razor blades. The right amount of personality without going too far. You’re never hearing the voice over the song. Then Ward’s band came out and ran through a 90 minute set that pulled from all 6 of his solo releases.

My only disappointment was that opening act Vivian Girls didn’t translate well live. All distortion and all of their songs literally and figuratively ran together. They’re style is similar to a number of bands from the early 90’s that were better.

All in all – I wish all shows I attend would be like this, but then again, when everything is special, nothing is. Friday night was special.