First off – I’m not here to diminish Sarah Palin herself – she’s simply not qualified to be President of the United States. Yes she’s the governor of Alaska.  She was also a small town mayor – with all this she brings the reputation of a straight talking reformist.  She balances out the McCain ticket when it comes to  ideology which will appeal to right wing nuts – I mean voters.

Basically, if you close one eye, squint with the other, and look at this, it all makes sense.

Who is Sarah Palin? Here’s some basic background:

It’s quite obvious with this pick that the McCain is attempting to woo Hillary Clinton voters disappointed with Barack Obama’s nomination.  As if everyone voted for her simply because she’s a woman.  It would be as if Alan Keyes would be a valid replacement for Obama because they’re both black.  It’s insulting.  And I’m sure that some former Clinton supporters will fall for it.  Problem is, those voters were never going to vote for Obama anyway.  But anyone who voted for Clinton based on her progressive record, healthcare advocacy, support for reproductive rights, her wealth of Senate experience – well, they’ll be sorely disappointed that John McCain thinks that Palin matches up to her.

You believe this pick was made on qualifications?  Ask yourself this: until last Saturday, Hillary Clinton was still in the running for the democratic VP nomination; do you think that Palin would have received the nomination if Clinton was chosen?  There’s nothing she brings outside of her gender that couldn’t have been brought by another candidate in that case.  Mitt Romney brings a conservative rep.  Rudy Guliani brings the tough talking.

OK – she brings one other thing – her youth. Kay Bailey Richardson would have been more sensible a choice, but at 65, she doesn’t fit the need. She does have loads of experience having been in the Senate since 1993.  There’s that word: experience.

Which McCain are we to believe? The one that railed against Obama’s inexperience or the one that chose someone 3 years Obama’s junior, with  significantly  less experience than Obama (Obama has 8 years as an Illinois State Senator and 2 years as a U.S. Senator) as a possible Presidential replacement?  Palin has no experience that shows her capable in regards to dealing foreign affairs, the defense, the threat of terrorism, or the management of the world’s largest economy.  You have to wonder about his judgement and pragmatism.

Listening to the Republican spin on this is amazing.  They’ve decided this was a brilliant and bold choice. To me it seems shortsighted and dangerous. I wondered how Republicans would respond in their national convention to the successful DNC.  It appears now that their response is one of defiance and insult. Instead of bringing substance to the campaign with their choice for VP, they’ve decided to counter program with a choice based on visual and emotional appeal as opposed to policy expertise.

The fight for the Democratic nomination was bloody and brutal.   This week’s Democratic National Convention goes a long way towards fixing the cracks that were developed.  It’s telling that those cracks are what Republicans were banking on.  Guess what: bank on something else.

Hillary Clinton, followed by husband Bill, and then Joe Biden have done a great job bringing the attention back to where it needs to be – the previous 8 years, and our collective futures.

But that’s for another day and another post.  Trust me over, the next 67 days I will have plenty of time and anger to discuss the many reasons why you don’t vote for Bush/McCain and all the reasons you vote for Obama/Biden.  This week is all about revving up and preparing for another battle.

Thank you Hillary and Bill for putting the good of the country first and bringing the party back together.

Keep yourself healthy – we may need you to continue the work in 2016.

BTW – I’ve laid low on the politics this summer.  Labor day weekend fast approaches, and the summer is over.  We’ll be firing up the engines starting Monday.

I’m sorely disappointed in the coverage of the DNC tonight. A former President is currently speaking; a speech as important as last night’s.

Instead we get Supernanny, America’s Got Talent, and Criminal Minds.

I hate to make the race into a game. What’s at stake is so important, it’s just a bad analogy. That said, in games, you play to win the game (thank you Herm Edwards for that one). The one thing I worried about Barack Obama is that he wouldn’t do what was needed to win. No matter how good Obama makes you feel, if in January, John McCain is taking the oath of office, it makes no difference. This is the one thing that Clinton claimed that I believed. Sometimes I feel Obama doesn’t have the stomach for the dark underbelly of politics. This week by deciding not to take public money to finance his race made me feel as if he’s going to do what it takes.

Obama had to go back on his word; never a good thing for a politician. What Obama didn’t know when he made that pledge was that his method of financing through small donations would allow him not only to battle the Republican candidate, but it would also allow him to take on the 527s. The thing that Republicans bank on is that they’ll spend the $85 million allocated by taking public money, and the 527s such as the Swift Boat Veterans, will do the rest. They expected the Democrat to take the public money – and then bitch and moan about the attacks from the 527s. Obama hasn’t played by the rules. By continuing his method of financing his campaign, he gives his campaign a chance to battle toe to toe against the Republicans and all its henchmen.

It couldn’t have been an easy choice to make, because every politician avoids going back on their word; but this decision shows Obama is willing to make the hard decision. I could care less about a good guy that doesn’t take the White House from the long national nightmare.

This was a good week for Obama.

All of the angst and bitterness of the past 16 months is done. We Democrats have a nominee and now it’s time to focus on righting the ship. It is time to end the enduring, national, embarrassment that has become of our executive branch. It is at this point in history that we have a chance to make an inspired choice that is hallmarked by optimism in our country and who we can be. We can choose to ignore the politics of fear that we know the Republican party will resort to.

The Democrats are going to take more of our money, make us weak, invite gays over to screw your wife, take your guns, and burn the flag. Obama will be a first cousin of Bin Laden and married to the Saddam Hussein’s sister.

Anything to scare you into four more years of the Bush administration. The Democrats gave you a black man and a woman as your options. Obama is focusing his entire campaign on “Change” – isn’t it time?

After George Bush was elected the last time, I was depressed. I knew that we had made a mistake. There were many reasons why he won the biggest of which was that the Democrats really didn’t present a great option. How many people said “There’s no real difference between Bush and Kerry”? This is four years after saying the same thing about Bush/Gore- or what I refer to as Bore 2000. Now you have a choice. A man who supported the war then, supports it now in light of what we now know, and supports it for the foreseeable future, or a man that has always been against the war – and will correct this mistake.

And while we’ve been in Iraq, we’ve abdicated our role as leader of the world community. This is what happens when your President lacks the skill required to be a diplomat. McCain is ready, fire, aim – more of the same. That’s what got us into this mess. We need someone who will be careful with the future of generations to come, because they’re the ones that pay the debts incurred by current Presidents.

Please someone give me a good reason why you would vote to continue the past 8 years with McCain? Is it because the economy is so good? The dollar vs. the Euro? The price of fuel? The foreclosure crisis? The sinking opinion of the U.S. by our allies? The unfinished war in Afghanistan? The debacle in Iraq? Tell me – what exactly is it that this administration has done even a fair job at? So why would we reward them with four more years?

There is no more important task that you can do over the next few months than register. If you have registered, get educated. If you are educated, then you know Barack Obama is the choice you need to make – you need to convince your friends and family to get out and vote.

Don’t let this one go the wrong way.

And as important of an election that this is – Obama needs to settle the differences he has with Clinton, and choose her as the Vice Presidential candidate. With all her negatives, she still rounds out this ticket in a dynamic way in which no one else can. Honestly, if she fought this hard against one of her own, imagine her against McCain.

Barack – bring her aboard. Just ask her to leave Bill at home. 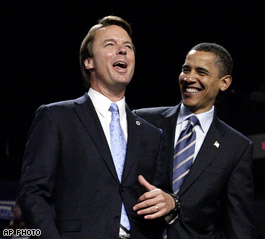 As if we didn’t know this campaign was already over.

I have some very exciting news.

My good friend John Edwards is endorsing our campaign and joining our movement for change.

We’re here in Grand Rapids, Michigan — and if you receive this message in time, you can probably turn on your TV and be part of the moment.

I’m deeply honored by John’s support. He is a true leader who dedicated his career to improving the lives of ordinary Americans.

John ran a strong, principled campaign for president, focusing on a number of important issues where we share common ground — universal health care, bringing our troops home from Iraq, and eliminating poverty in America.

The way he ran his campaign was also important. He ran in a way that reflected our shared conviction that we need to fundamentally change politics.

Let’s welcome John Edwards to the campaign with an outpouring of the kind of grassroots support that is bringing our political process back to the people.

Make a donation of whatever you can afford now, and if you choose, include your own note to Senator Edwards. I’ll make sure he gets them:

Thank you for all that you’re doing,

Time to start thinking of beating on George Bush III (otherwise known as John McCain), not each other.

I  couldn’t help myself.  Share your captions for this photo in the comments.

I’ll start it off: “If it’s good enough for Bill…”