I love that the upcoming version of OS X  for the Mac, 10.6 Snow Leopard, is available for the dirt cheap price of $29 to upgrade. The family pack that allows you to upgrade up to 5 computers in a household is $49.

The new operating system has been promoted as a refinement of Leopard as opposed to an entire new OS. Focused on improvements as opposed to new features.

Just 4 years old and my poor mac is as dead as a doornail. Actually not fully dead, but $900 to fix. Ugh. Was planning to buy something but not now.

Apple has it in for me this week. 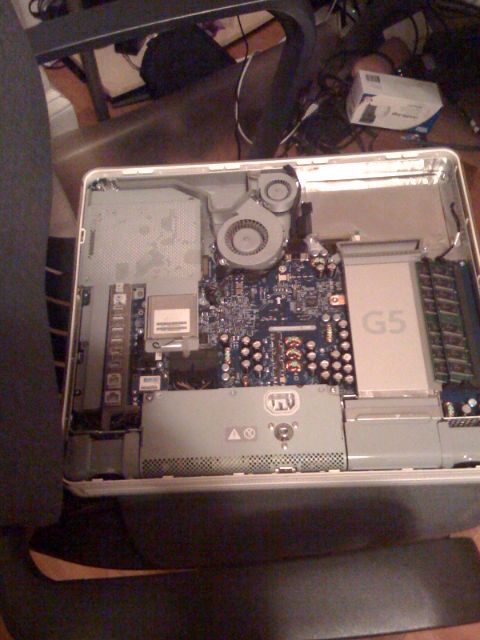 I purchased an iMac G5 two   years ago.   Entirely new technology, a beautiful machine for a tidy sum of $2,000 or so.   Apple announced that soon after my machine was released, that there were problems with the power supplies on this machine.   I started to have problems earlier this year and held out until this weekend – when the iMac decided it wasn’t going to turn on.     Thank god I purchased the AppleCare warranty on this machine.

After a crushing Eagle’s loss – I drove to King of Prussia mall to make my 5 o’clock appointment.   By 5:45 I was on my way back home with a working computer courtesy of a newly installed power supply.   On a Sunday!   At 5 P.M.

Now I have to get back to my project.

I have to HIGHLY recommend the program Silica for mac users that have caller id and a mac with a modem (not all do these days). Silica is simple – it provides an on screen display for any call coming in along with details it finds from your address book (picture and name) right on your monitor and that’s all it does. No more running to find the phone to see if you want to answer it. The installation is easy because there really isn’t one – just download it and start the program running. It’s also very customizable, allowing you to change position of the window, the color, and various timing options.Couple of notes – You need OS X although if you’re not using OS X why don’t you put OS 9 and your abacus away. Second, some of the current macs (all of them?) don’t come with modems – although there is a USB modem available made by Apple. Finally – you need to have Caller ID from your phone service (had to say it – someone would think this adds it).

If you use your computer a lot, Silica is really helpful.

I’ve grown a facsination with the service YouTube. Those that read this blog probably know this already. Well part of what Youtube allows someone like me to do is to find content that I want to see without searching a million websites and without worry that it won’t run on my mac.

This past weekend Saturday Night Live ran a great digital short that was essentially a Natalie Portman rap video. It was up for a little on Youtube and then taken down due to copyright infringement. Apparently NBC says that users can go to the NBC.com site to view the video. This is true as long as you’re on Windows – their videos don’t run on anything but Explorer Windows.

What makes this such a bad decision is that they call this the “viral video of the week” – without truly understanding what viral marketing is. If you truly release something virally, it works best when it can be distributed freely. That way it reaches more people. As it stands now the only way to access this video is to go to NBC.com. Problem is who would? Doesn’t NBC suck outside of The Office and My Name is Earl? If you asked anyone on Sunday morning if they saw SNL last night, they probably would say no; why? Because it sucks. So all that said, wouldn’t it make sense to put a popular video in as many places as possible? Wouldn’t people see it and say “Hmm, maybe SNL doesn’t suck anymore.” Don’t you think they reaped the benefits of the Lazy Sunday video being passed all around the internet?

This is the problem with the media conglomerates of today – they want to take advantage of today’s users, but are unwilling to do it on terms that todays users will agree to. There are a ton of funny videos out there being provided by people who get it.

If I can’t view yours, I can move onto another.