During the Super Bowl, Chrysler ran a commercial for their mid-age crisis auto, the Dodge Charger. Now I’m not a man that has ever needed a car to express my maleness, but some men do – this commercial was targeted towards them.

This commercial was designed to not be ignored. It’s creative execution is done in a way that makes it stand out. It cuts through the clutter and targets the one type of guy – we’ll call him PW for short.  This commercial was destined to offend – and it has. Some women have gone online to express their dissatisfaction with and ad that doesn’t address them. On one blog posting a about the Dodge commercial, I saw the following comment:

And then there’s this parody ad:

I think that for too long there’s been the assumption that men abdicate all decision to the women in their life. I’m sure some men do. But what about men that have backbones; or men that don’t like women in that way; or men that have a relationship where they consult on decisions with their partner? Why does every product need to be sold to women?

Women have earned the right to vent at this male dominated society – and I understand where the parody is coming from, but not every message is meant for every person. As a black person, I tend to skip over ads for tanning salons – I assume they’re not meant for me.

Advertising has swung to target women so decidedly, that advertisers don’t know how to speak to men. The only way they know how to is to insult women, show T&A, or feature scatological humor.

All this commercial does is target men in one of the few ways the advertiser knows how to. If the ad doesn’t ad doesn’t speak to you, I say you ignore it.

What do you think?

There was a story today about how Blockbuster will be closing upwards of 1,000 locations by the end of 2010. My question is “Why wait”? We decided years ago after being treated poorly by Blockbuster to stop giving them our money. Between Redbox, Netflix, and various on demand options – we decided that Blockbuster didn’t deserve us as customers.

It’s bad enough that technology has turned against Blockbuster, but what they failed to do was create loyalists out of their customers. I know I definitely felt Blockbuster was a necessary evil and as soon as I had the chance to be rid of them, I was. If you develop a brand, a service, a product that evolves into a relationship that your customer values, then those customers will follow you onto your next venture.

Blockbuster’s other problem is that it didn’t innovate it’s service soon enough. Netflix has 10 times as many users, connects through set-top boxes and Xbox, and streams to PCs and Macs. Meanwhile Blockbuster is stuck in the 80’s. When they finally go under it will be met by “ho-hum” from me.

Note to PNC – don’t ask a question you don’t want an answer to.

Today I called PNC because my wife received a debit card with her maiden name on it. They could see that a mistake was made, but I was told she has the call (I was hoping to save her from having to). They could see they sent the wrong card, but wouldn’t do anything about it – even though we’re on the same account, even though I answered all the security questions. So at the very end of the call the customer service rep asked me “are you satisfied with the results of the call?” Of course I said no, to which she said “sorry” and hung up.

Question – why ask me if you’re not prepared to do something about anyone who says no?

On my way into Philly to meet some former co-workers for a drink. I’m taking SEPTA public transit and I’ll give them props when deserved but today the deserve complaints. SEPTA charges extra for buying tickets on the train but provides no way to buy tickets ahead of time at most stations. No online e-tickets, no ticket machines, and few ticket counters with decent hours. What’s worse is that SEPTA tickets expire, so you can’t buy a few in advance and just keep them around.

In this day and age, with all the technological advances available this simply makes no sense.

SEPTA – you can do better than this. 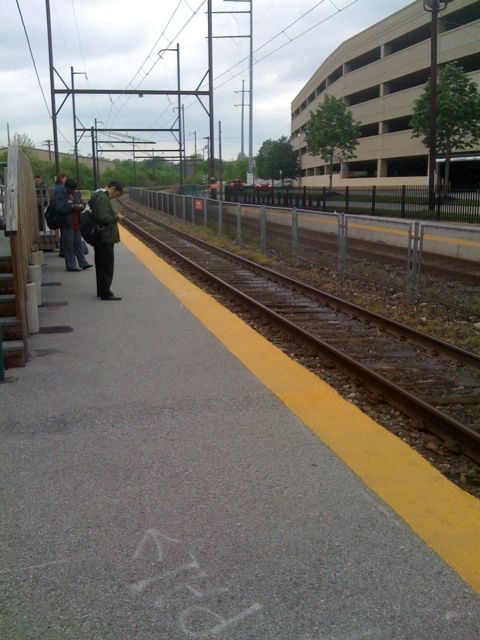 One of the signs of this recession is that every business that’s still in business is becoming much more aggressive about generating sales. It’s a tough time to be a customer because businesses are desperate, and treating customers with respect is a thing of more prosperous times.

I wanted to receive Amazon’s MP3 newsletter but the only way to receive that newsletter is to sign up for Amazon’s product emails. These emails are based on previous purchases. Though I’ve bought a lot of varied products over the years, I decided to take a chance and subscribe; what a mistake. At least an email every day and the subjects seemed to be scattershot. One day Blu-ray videos on sale, the next grocery savings; one day netbook savings, the next summer reading.

The problem with Amazon’s approach to database email is that they assume everything I’ve purchased from
Amazon in close to 10 years of purchasing, indicates my interest in that product. Note to Amazon: the Dance Revolution I purchased for my niece a few years back would only be an indication of products I would not be interested in.

With all of the power and might of Amazon, all the information they have, they can do better. How about basing this incessant emails on the products I purchase the most?   How about giving the customer broader options when opting into emails?   How about allowing customers to choose an email frequency?   Instead Amazon has decided it’s best option is to drive sales by nagging the customer until the submit.

Or turn them off.

As it stands, I decided to opt out of all emails from Amazon because in two weeks Amazon annoyed me, and if they could offer me an email option that was more tailored to my interest, maybe they would be able to make more money from me, and others like me.

I guess it’s a good thing, I could do to save more money.

Finally Microsoft is running an effective ad campaign. If you haven’t seen it, Lauren (cute redhead too) is given $1,000 to buy a computer. She wants it to have a large monitor and a comfortable keyboard. First she heads to an Apple store and immediately leaves when she realizes that Apple has one computer in that price range – the Macbook with a 13″ screen. She then heads over the Best Buy where she finds an number of machines that fit her price range and leaves with an HP that costs $699.

I have to say that this commercial is smart. If you need to buy a computer, absolutely price is a concern, and considering nothing else, it’s an area that Macs can’t compete in. Of course there are other issues. I’m currently writing this post on my wife’s Sony Vaio laptop which is just a year and a half old. I would have preferred to buy a Mac for her, but a month prior to getting married, the price of a Mac was prohibitive. She needed a computer to get things done, so I got her this computer for $600. It has gotten things done, but there is the “you get what you pay for” issue. Most of the time we’ve owned this machine, this computer has been a pain to use. Vista was horrible. The amount of call trialware on the computer was appalling. Over the year Microsoft has made Vista better, and I’ve done things to make the computer bearable. Honestly most people don’t care that much. They don’t expect much out of their computer which makes a Windows machine perfect for them.

Apple need to do a better job at the low end of the price spectrum. There is absolutely no reason Apple shouldn’t be able to provide a Macbook with a 15″ monitor for under $1,000. As people begin to pay more attention to their budget and bottom line, the extra dollars may be too much for their wallet. Apple needs to be more inclusive.