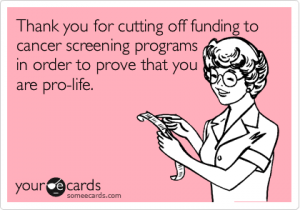 2 thoughts on “Komen, Planned Parenthood & the power of an angry mob”