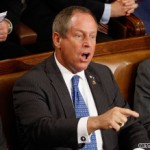 Anyone who supports health care got a gift from the heavens when Joe Wilson lost his mind and called the President of the United States of America a liar to his face. So when the Republicans should be talking about health care, they’re talking about this, and the reason that I believe this is important is that it shows the Republicans to be frothing, crazy, out of touch fear mongers.

The President was brilliant tonight. He did what he needed to do, he took off the gloves, and he called these liars out. The Democrats need to fall in line and make this happen. The Republicans have been shown to be weirdos that don’t have our best interest in mind. All the talk from over the summer in those town hall meetings with those crazies is over. President Obama took the ball and now has the momentum on this issue. Waiting until now, after the end of the summer to respond was brilliant.

Now it’s time for the rest of us to make sure we let our representatives know we want this. We need to keep the momentum on this and make it happen.