A few weeks ago we visited Washington D.C. and while there we took the time to visit the National Mall. It had been years since I’d seen the White House or that Lincoln Memorial, and I had yet to see new memorials such as the World War II memorial and the Vietnam War Memorial. You visit a memorial to pay respects and the be impressed. I left the mall feeling a bit sick to my stomach at the condition of the mall.

Some of the things I saw:

Word is that there was $200 million removed from the stimulus package that would have been dedicated to fixing major problems. According an article from the Philadelphia Inquirer article, earmarks are another issue. One thing I do know is that this is a disgrace. Many people will say that we have other things to worry about in this day and age and I don’t disagree. But worrying about other things doesn’t mean your forget everything else; we pay our public officials to multitask? It’s as if we have decided to not clean or take care of our house because we have to work. When someone walks into my house and it hasn’t been cleaned or taken care of, I’m embarrassed. I feel the same way about the mall – I’m embarrassed to allow visitors to see it. We’ve been lazy and derelict in our responsibilities.

I found a  picture  of the  reflecting pool facing the Washington Monument  from 2005 – a few short years ago, and the difference is remarkable. Just because “these are difficult times”, doesn’t mean we can simply ignore all of our responsibilities. As much as we need to keep things up for today’s sake, we need to maintain our cities and infrastructure for future generations. Because the District of Columbia doesn’t have representation in Congress, it’s the responsobility of our elected officials to maintain the house in which they work and that has come to represent our country to others.

The first shot  is a picture found on Wikimedia Commons that shows the National Mall as recently as 2005. The other shots were taken 3 weeks ago by myself on our visit. 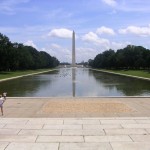 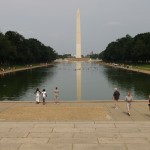 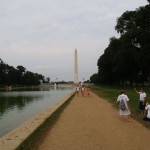 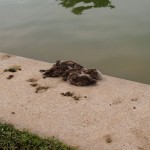 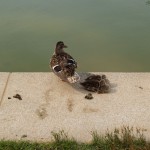