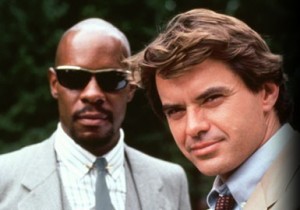 Saturday nights from 1985 through 1988. Since I didn’t have a great social life, I got to watch most of these live. Spenser for Hire, based on the books by Robert B. Parker, would become one of my all time favorite shows. Along with Magnum P.I. and The Equalizer, it was a show that attempted to bring more to the private investigator genre than just guns, girls, and blood. Spenser was intelligent (he would tell people his name was spelled with an “S” like the poet); he more than cooked for his  psychiatrist girlfriend, he was a gourmet; and he was sympathetic to and helped those in need; and he carried a gun and could take care of himself. It’s every boy’s fantasy to be just like him. He had beautiful smart woman, could take on anyone – and wasn’t afraid to do so, and was  independent  in all ways.

Robert Urich was Spenser – he said before his untimely death that it was his favorite role. I read all of the books, and as I read them, it was as if the role was written for him. When the show was cancelled (in part due to the high cost of filming on scene in Boston – part of the show’s character), he went on a tour to try and revive it. There were 3 post cancellation movies that were good, but by then, it was gone.

Then there was Hawk, played with a fevered heat by Avery Brooks – he wasn’t a bad guy, but he certainly wasn’t good. To this day I want a six series BMW like Hawk drove and to look as good in sunglasses and a shaved head. And even though he was a thug, he was a smart guy and was principled.

What Parker did was take the stereotype, and turn it on it’s head. The P.I. that quoted poetry, kicked ass, solved the mystery, and made it home in time to cook dinner for his girl. If only I could literally kick ass.

I’m not sure if the show would hold up to watching it some 20 years later. Some shows are better left to the memory (as I found out with Magnum).

I’ll have to let you know – I can’t own the DVDs, but AOL Video does have Spenser for Hire on demand. Let’s hope I don’t ruin the memory.

3 thoughts on “Where is my Spenser for Hire on DVD?”