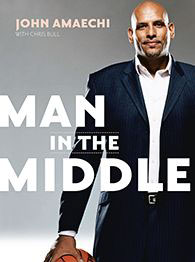 It’s been roughly two weeks since former NBA player John Amaechi came out in advance of his book Man in the Middle. The resulting controversy has been hilarious (such as the great Shavlik Randolph quote â€œAs long as you don’t bring your gayness on me I’m fineâ€), sad (as in Tim Hardaway’s hate filled rant), but most of all it has been predictable.

“Women have a right to work wherever they want – as long as they have dinner ready when you get home.” – John Wayne

Many NBA players are little more than children playing child’s game since their late teens for obscene amounts of money. They’ve been coddled, enabled, and entitled their entire lives and they are far removed from a reality that most people would view as normal or healthy. They share a locker room that works to grow and confirm this existence. That they don’t know how to respond when real life enters should not surprise anyone. Hardaway’s comments are simply his way of saying “I fuck women. I LOVE women. I DON’T LOVE MEN! “ in a public forum so as to make sure no one assume he likes the schlong. Anyone that objects this loudly probably has a few issues they need to discuss with a health care professional.

Some 60 years since Jackie Robinson broke the color barrier in baseball, the thing that most bothers me about Hardaway’s comments is the entire lack of perspective and knowledge of history that it displays.

In his first 37 games, Jackie Robinson was hit by pitch six times. (In 1946, no player was hit more than six times in the entire season.)

How can you be so intolerant when the history of your people is littered with the exact type of bigotry. The fear of and inability to accept the differences of others made blacks slaves, put the Japanese in interment camps, caused the Holocaust, and has oppressed women. We fail to learn from the mistakes and missteps of those that preceded us. You know you have truly arrived when you have gone from the oppressed to the oppressor.

So if gays and lesbians want to see a silver lining in all of this, here it is: in thirty years or so time, your turn to look down on some group will come.

One thought on “Oppressed no more: John Amaechi”