It seems like such a short time ago when those of us who have been criticizing the Bush Administration were at best lonely, but at worse, branded as traitors in a time when our country needed everyone to blindly follow the President over the ledge. Last night at the Grammys I was reminded how much company we have these days.

“Just so you know, we’re ashamed the President of the United States is from Texas.” The resulting firestorm of criticism included the Chicks being branded traitors, for radio stations to ban their records, and for them to have a target branded to their collective forehead. Their CD sales plummeted. Concert appearances were postponed or canceled outright. And those that would choose to criticize a President, whether it was deserved or not, found out what could happen when zealots turn the tide against you.

What a difference a few years can make.

was released to a drastically different situation than that of 2003. Because of the political deadly combo of scandal, corruption and Iraq the Republicans were well on their way to losing the Senate and 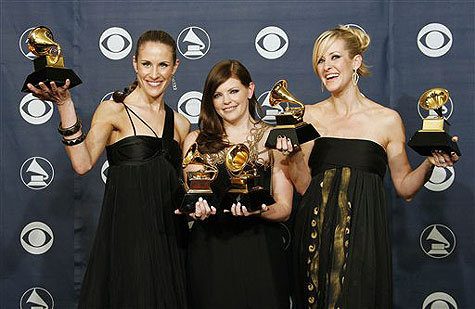 the House. The search for the weapons of mass destruction, had long been abandoned under the acknowledgment that they would likely never be fan, and probably never even existed.

Now everyone is a Bush critic. Complaining, protesting and criticizing is only dangerous if you get trampled in the crowd of people that are rushing to do the same.

But those of us who have been complaining since the Shrub stole an election in November 2000, and have not let up since, had to smile Sunday night when Don Henley pumped his fist and then announced that the Dixie Chicks had won the Record of the Year. Yes it’s only the Grammys, but it wouldn’t have happened 3 years ago. To see these 3 women have their moment in the sun so publicly served as sweet, sweet vindication. A huge, flying “Fuck you” to those that abandoned them and criticized them just a short while ago.

People have forgotten they ever voted for Bush much less criticize his opponents. They were against the administration the entire time. But we know better. One would hope that this entire situation would serve as some sort of lesson. But it won’t. The next time will be just like this time, but vindication probably won’t come so quickly. It will probably be like it was for those blacklisted in the fifties – with vindication coming after they had passed.

But for this time, for all of us that were steadfast, I have this to say:

We told you so.

23 thoughts on “Grammy Vindication for the Dixie Chicks”